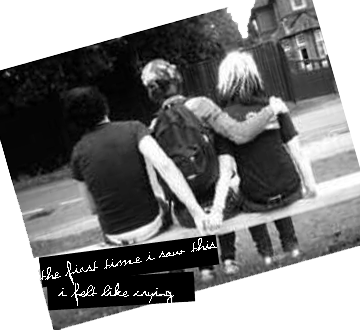 He didn't even notice it at first. She started to change. From the day the baby was born, she began to get irritated with everything around her. She got mad at everything. Even the baby seemed to be an injustice to her. He kept trying to make everything all right for her. Buy her things. Take her out to dinner once a week. But nothing seemed to satisfy her. For two years he struggled to pull them back together like they were when they first met, but finally he knew that it was never going to work out. So he hit the bottle again. But this time it got... mean. This time, when he came home late at night, drunk, she wasn't worried about him, or jealous, she was just enraged. She accused him of holding her captive by making her have a baby. She told him that she dreamed about escaping. That was all she dreamed about: escape. She saw herself at night running naked down a highway, running across fields, running down riverbeds, always running. And always, just when she was about to get away, he'd be there. He would stop her somehow. He would just appear and stop her. And when she told him these dreams, he believed them. He knew she had to be stopped or she'd leave him forever. So he tied a cow bell to her ankle so he could hear her at night if she tried to get out of bed. But she learned how to muffle the bell by stuffing a sock into it, and inching her way out of the bed and into the night. He caught her one night when the sock fell out and he heard her trying to run to the highway. He caught her and dragged her back to the trailer, and tied her to the stove with his belt. He just left her there and went back to bed and lay there listening to her scream. And he listened to his son scream, and he was surprised at himself because he didn't feel anything anymore.
All he wanted to do was... sleep.
And for the first time, he wished he were far away. Lost in a deep, vast country where nobody knew him.
Somewhere without language, or streets. He dreamed about this place without knowing its name. And when he woke up, he was on fire. There were blue flames burning the sheets of his bed. He ran through the flames toward the only two people he loved... but they were gone. His arms were burning, and he threw himself outside and rolled on the wet ground. Then he ran. He never looked back at the fire. He just ran. He ran until the sun came up and he couldn't run any further. And when the sun went down, he ran again. For five days he ran like this until every sign of man had disappeared.
PULKUNNUSSIJA VON IL CIELO È ALTROVE... às domenica, maggio 23, 2010